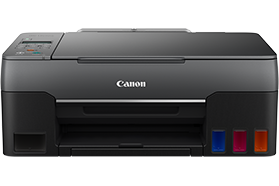 The Canon PIXMA G3160 Wireless All-In-One Printer is designed for productivity— delivering high-volume, low-cost printing and excellent maintainability and usability. Its refillable ink system prints up to 7,600 black / 7,700 color pages from one set of ink bottles.1 Print, copy, and scan with ease and enjoy great versatility. Print documents, borderless3 photos, and more on a variety of media types and sizes with hybrid inks for crisp blacks and vivid colors. Plus, you can print on the go wirelessly from your favorite mobile devices.2 Print more for less with the Canon PIXMA G3160 Wireless All-In-One Printer.

1. Page Yield of 7,600 pages is based on Economy Print Mode. Page yield of included ink bottles used for initial setup is lower than the replacement ink bottles, as a certain amount of ink is consumed to fill into the print head during setup (charging the print head initially). Page yield is the estimated value based on Canon individual test method using the ISO/IEC 24712 chart and continuous printing simulation with the replacement ink bottles after initial setup. Page yield of color inks is an average yield of cyan, magenta and yellow inks combined. Page yield varies significantly depending on content printed, ink levels maintained in all four reservoirs, and other factors. Up to 7,600 (black)/7,700 (color) printed page yields are approximate, based off document pages printed.

2. Wireless printing and scanning requires a working network with wireless 802.11b/g/n capability, operating at 2.4GHz. Wireless performance may vary based on terrain and distance between the printer and wireless network clients.

4. Requires an Internet connection and the Canon PRINT Inkjet/SELPHY app, available for free on the App Store and at Google Play. Compatible with iPad, iPhone 3GS or later, and iPod touch 3rd generation or later devices running iOS 12.0 or later, and Android™ mobile devices running Android 4.4 or later. Your device must be connected to the same working network with wireless 802.11 b/g/n capability as your printer. Requires a compatible social media account and is subject to that social media account's Terms of Service. Certain exceptions may apply.

5. Requires a smart device with the Canon PRINT Inkjet/SELPHY app installed and connected to the desired active wireless network to complete cableless setup.

9. Canon Print Service is a print plug-in for Android smart devices, which enables printing from Android v4.4 - v5.0 devices to many Canon printers via a Wi-Fi network. The plug-in does not work as a standalone app. Available for free at Google Play.

11. Requires an active smart assistant account linked and accompanying app enabled, the smart device and printer to be actively connected with permission to the Canon Inkjet Cloud Printing Center, and the required action(s), skill(s), or applet(s) available/enabled to the compatible printer. Voice commands can not be displayed as text on Amazon smart devices with screens.

13. Resolution may vary based on printer driver setting. Color ink droplets can be placed with a horizontal pitch of 1/4800 inch at minimum.

14. Optical resolution is a measure of maximum hardware sampling resolution, based on ISO 14473 standard.

17. Some functions may not be available with these Operating Systems. Please refer to manual or our website for details.